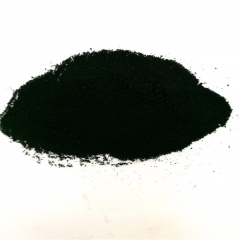 MnO2 is an alpha polymorph that can bind various atoms (and water molecules) in the "tunnels" or "channels" between the manganese oxide octahedrons. People are very interested in α-MnO2 as a possible cathode for lithium ion batteries.

Manganese dioxide is an amphoteric oxide. It is a very stable black powdery solid at room temperature and can be used as a depolarizer for dry batteries. It is often used in the laboratory to produce chlorine through its oxidizing properties and the action of concentrated hydrochloric acid. Manganese dioxide is a strong oxidant in acid medium. Manganese dioxide is [MnO2] octahedron. The oxygen atom is on the top of the octahedron, and the manganese atom is in the octahedron. [MnO2] Octahedrons are joined together to form single or double strands. These chains and other chains together form a void, octahedral or hexagonal close-packed, or square close-packed tunnel structure.

Manganese dioxide is an amphoteric oxide, and there are corresponding salts in the perovskite structure, such as BaMnO3 or SrMnO3 (obtained through a compound reaction in a molten alkali system), and manganese tetrachloride is also present.

What is the scope of application of manganese dioxide?

Used as a depolarizer for dry batteries, a catalyst and oxidant in the synthesis industry, a coloring agent, decolorizer, and iron removal agent in the glass industry and enamel industry. Used in the manufacture of metal manganese, special alloys, ferromanganese castings, gas masks and electronic material ferrites, etc. In addition, it can also be used in the rubber industry to increase the viscosity of rubber. It can also be used as a catalyst in chemical experiments.