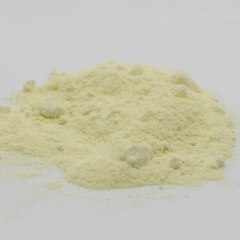 Indium oxide is a new n-type transparent semiconductor functional material with a wide bandgap, small resistivity, and high catalytic activity, and has been widely used in the field of optoelectronics, gas sensors, and catalysts.
Purity: 99.9%

Indium oxide is an oxide with a molecular formula of In2O3. The pure product is white or light yellow amorphous powder, which turns into reddish brown when heated. Indium oxide In2O3 powder is a new n-type transparent semiconductor functional material with a wider band gap, smaller resistivity and higher catalytic activity. It has been widely used in the field of optoelectronics, gas sensors, and catalysts. In addition to the above functions, when the indium oxide particle size reaches the nanometer level, it also has the surface effect, quantum size effect, small size effect and macroscopic quantum tunneling effect of nanomaterials.

What are the uses of indium oxide In2O3 powder?

The raw materials often used in resistive touch screens are mainly used for fluorescent screens, glass, ceramics, chemical reagents, etc. In addition, it is widely used in traditional fields such as colored glass, ceramics, alkaline manganese batteries, mercury replacement corrosion inhibitor, and chemical reagents. In recent years, it has been widely used in high-tech fields such as the optoelectronics industry and military fields. It is especially suitable for processing into indium tin oxide (ITO) target materials, manufacturing transparent electrodes and transparent heat reflector materials, and used in the production of flat liquid crystal displays and defogging ice. Device.

Indium oxide In2O3 powder is used as materials such as spectral purity reagents and electronic components.

Indium oxide In2O3 powder is used as a protective coating for metal mirrors, and photovoltaic display semiconductor films are also used in the production of indium salts and glass.

Among semiconductors, indium oxide can be used as an N-type semiconductor of a resistance element in an integrated circuit.

In histology, indium oxide is used as part of certain dyeing recipes.